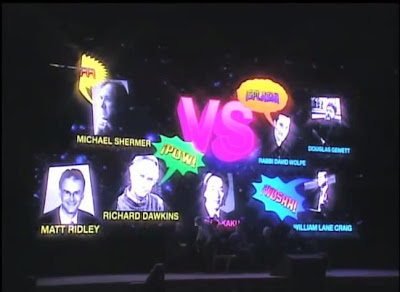 This panel debate (YouTube) is unique in several ways. Firstly, it is bilingual, with direction and narration in Spanish, and substantive debate in English. Secondly, it features three men on each side but only gives each one a few minutes at a time to make an argument. Thirdly, the speakers talk in front of what appears to be the world's largest 1980's themed screensaver including flying polygons. Finally, the lectern is in a boxing ring. No, really, an effing boxing ring. Evidently the Mexican version of TED talks have quite a bit more flair than the sober lectures they do here in the Estados Unidos.

Matt Ridley leads off with a decent joke which doesn't translate well to those unfamiliar with the idiomatic English meaning of "recreational area" and then briefly makes the case for emergent order as opposed to top-down design, in both society and the biosphere more generally.

Craig, as per usual, makes the case that purposes which don't last forever just aren't worth having, that if we don't have a holy being to obey and worship forever, then everything must be meaningless. Evidently, he values servitude so much as to make it the end all be all of human existence. He goes on to (somewhat idiosyncratically) define "evil" in strictly theistic terms and then smoothly equivocate by claiming that atheist must therefore claim that there is no evil in the world, in the ordinary sense of the term. Clever rhetoric, to be sure, but as a philosopher he has to know better than to think this is a valid mode of argument. Finally, he briefly lists his usual five arguments for theism.

Shermer wastes some time upfront by talking about wishful thinking and the prosperity gospel, but then gets into his own case for purpose in a naturalistic world. He lists a few purposes which available to ordinary people leading ordinary lives without the hope of eternal life, and he does so fairly well. He might ought to have pointed out that most people spend the vast majority of their lives pursuing such ordinary purposes, rather than grovelling at the feet of their favored deity.

Wolpe argues that the debate ought to be about whether the universe as a whole has a purpose, and suggests (without a hint of embarrassment) that the purpose of the entire cosmos and its billions of galaxies and quadrillions of stars was to eventually produce people who will come to know and worship the God of the Hebrews, which just happens to be the his personal area of expertise. He does have one memorable line, though, in which he says that one might say the universe has purpose in the sense that the kitchen has a meal, that is, it has all the ingredients needed to create purposes. True, and what is more, a decent summary of the thrust of Shermer's talk.

Dawkins leads by insultingly comparing the opposing panel to children who have never grown out of the having of believing that everything can be explained in terms of what purpose it serves. He then gets into the nature of designed objects, which have a given purpose, and designoid objects, which merely seem to have one. At one point he accidentally gives away the farm by calling natural selection a "brilliant process" which makes it seem purposive, unless he meant "brilliant" in some sense more about luminosity than intelligence. Overall, he makes a decent case that we can explain everything in the universe without resorting to any universal purposes, especially with respect to living things.

They then go into rebuttal period, in which it becomes clear that the theistic bench has put somewhat more time into teamwork and planning so as to create a flow between their arguments with little overlap. Nevertheless, both sides have a go at the other side, and as usual, Craig is polished and precise, while Dawkins is scathing and condescending.

Overall, this is a must-see debate, no because of the substance so much as the style. I personally prefer dry and cultured Oxford style debate, but as they say, en la variedad está el gusto.
Posted by Damion at 8:02 PM