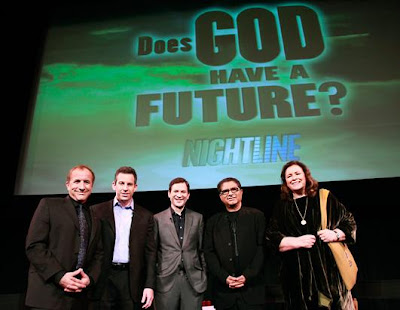 http://abcnews.go.com/Nightline/FaceOff/nightline-face-off-god-future/story?id=10170505
I've got to say right off that televised debates just up and wig me out. I'm not sure what it is about television which makes televised debates feel so different from ordinary debates. Maybe it's the animated watermark in the lower right corner. Possibly it is the thought of millions of pairs of eyes and ears. In any event, this debate consisted of a panel of four people, apparently chosen based on a combination of controversial ideas and sex appeal. Every panelist is given a brief period to make an opening statement.
Michael Shermer’s opening makes the case that religion is a cultural construct, as is obvious from the geographical and temporal distribution of religious ideas. He also makes an argument from the efficacy of methodological naturalism, and points out the cross-cultural tendency of human beings to over-detect agency-based explanation.
Deepak Chopra leads with a nod in the direction of science followed by a barrage of rather fuzzily-defined terms, such as “infinite consciousness” and “agent of downward causation.” He also alludes to the apparent fine-tuning of the universe to allow for the evolution of life.
Sam Harris makes it clear upfront that he wants to talk about religion as it is usually practiced rather than the god of the philosophers, who is “so denuded of doctrine as to more or less be synonymous with pure mystery or pure information or pure energy or pure anything.” He also makes it clear that the god of the people is the one that matters in politics and policy.
Jean Houston provides a story from an old Australian aborigine woman, and another even more amusing story from an old white American woman. She also makes it clear that she reads Dante without the benefit of translation, for some reason.
After their openings, the panelists start going back and forth. Predictably enough, Chopra spews a barrage of woo-woo talk and Shermer calls him on it. Eventually, Deepak drops this gem of pseudo-profundity, “In the absence of a conscious entity, the Moon remains a radically ambiguous and ceaselessly flowing quantum soup.” The crowd audibly boos. This is the both low point and somehow the highlight of the event. Damnable televised debates.
There is a constant tension throughout this debate between the skeptic panelists and the New Age panelists over whether they should be talking about religion as it is traditionally (and most widely) practiced, or religion as it is being re-conceptualized by authors like Chopra and Houston. On this point, at least, the woo-wooers have the title of the event on their side. On the other hand, the skeptics have the fierce urgency of the now on theirs.
Throughout the event, I found myself wondering if Deepak Chopra understands and believes what he says. I also found myself wondering if Jean Houston was going to at any point say something insightful and on topic, rather than merely telling stories and dropping names. Most often, I found myself wishing that the folks at Nightline Faceoff had found Harris and Shermer a more worthy opponent or two, but then again, this is television and I ought not expect ratings-driven producers to give two shits about philosophical rigor.