Hitchens vs. Wilson in Glenside, PA 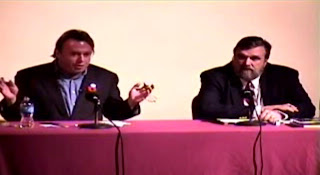 This debate went down in a curiously logic-free way (at least at first) since the opening statements seemed not to include anything like a cogent argument from either side.  The closest that Wilson got was an appeal to the premise that naturally evolved biological neural networks are no better at processing information than fizzy cans of soda, an utterly ridiculous meme which nonetheless seems to be making the rounds.  As I noted earlier, I cannot think of a chemical reaction more perfectly disanalogous to the amazingly complex processes studied by modern neuroscience than the shaking up of a can of soda – the only thing these things seem to have in common would have to be an abundance of carbon atoms.

In any event, once these guys got past their opening statements, which were mostly paeans to the beauty and truth of their respective views and the depravity of the other guy’s views, they got into a genuine back-and-forth which was fairly fun to watch.  Hitchens would do well to make most of his debates into mostly cross-ex with relatively little time upfront for openings and rebuttals.